Right before Christmas I made a pair of Sci-Fi tanks as a present for a friend.  I had seen other folks online who had modified inexpensive toy tanks into Sci-Fi tanks before, and it seemed like a fun project to do.  I was happy to have a reason to make a pair of them myself.   I started by buying a bag of toy soldiers that contained two plastic tanks from the toy aisle at the local Walgreens. 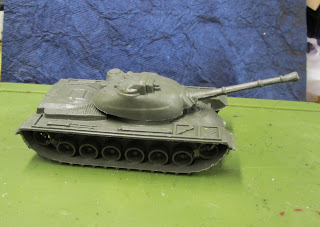 I replaced the existing turrets with ones made from old Spiriva inhalers, and the gun barrels were made from syringe covers.  I also added some engine pods to the backs of both tanks made from dollar store toy binoculars separated into two halves.  Other model and toy bits were then added to round out the look. 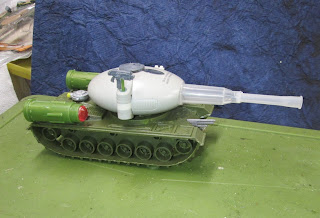 I glued a large fender washer into the hole where the old turret sat, and a section of copper tubing to the underside of each turret, allowing them to rotate when in place on the hull.  When everything was assembled, and the glue had had time to dry, I sprayed the tanks with light green camo spray paint. 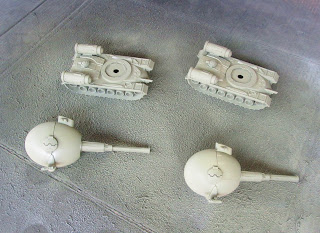 When the spray was dry, I added details, weathering and decals to complete the vehicles. 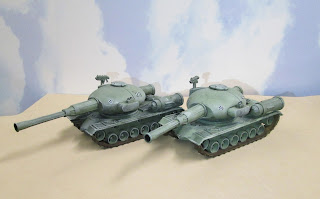 I'm pleased with how the pair turned out, and am looking forward to seeing them used in a game.
Posted by Chris Palmer at 8:25 AM