A Pair of Quick and Easy "Dollar Tree" Frostgrave Statues

This week I made a pair of quick and easy statues for my Frostgrave terrain collection.  They both were based off of figures I found in my local Dollar Tree store.  The first is a motion sensor rat that they had for sale at Halloween (It squeaks whenever anything moves near it); the second is a figure of Elsa from the movie Frozen, which is a toy that they seem to sell all year round.  I glued both to small Tropicana orange juice bottle lids using E6000 glue. 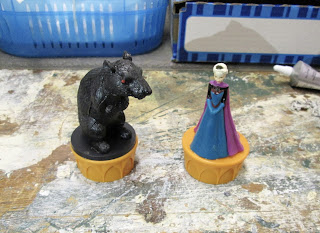 I first sprayed them with cheap Walmart flat black spray paint.  This reacted poorly to whatever plastic the Elsa figure's dress was made from, as it dried tacky.  I painted over it with my regular black craft acrylic, and this seems to have solved the problem for now.  Next,  I drybrushed both of the figures with a secession of three successively lighter grey acrylic paints to give the statues a stone look.
I must say the whole time I was painting the rat, it's motion sensor "squeak" was going off repeatedly; and more than once I was tempted to throw the whole thing against the wall as it was driving me crazy.   I'm now praying the cheap battery inside dies quickly.  I had thought it might be cool if the statue occasionally made the squeak sound during a game, but this thing goes off almost constantly!
I let the paint dry for a day, and then sprayed both with Testor's Dullcote varnish.  The next day I applied some snow effects and a couple icicles to Elsa.  I think I'll leave the Rat plain, so he can be used in other non-Frostgrave games. 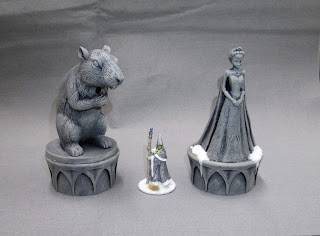