Last year at a  wargame convention flea market, I was lucky to find some ships which inspired me to want to construct a waterfront area for my Frostgrave games.  The first of these was a model of a ship under construction.  The second was a lot of old pirate ships.


The wooden model was very old apparently, as many of the glue points had dried out, and there were a lot of bits that had fallen off it.  This didn't bother me, as I already had thoughts of making it look like the ship in the beginning of the first National Treasure movie 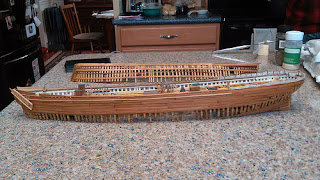 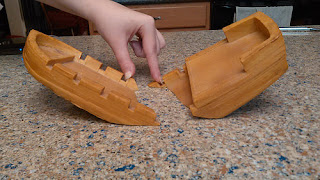 At this point, I've got the all the hulls ready to paint.  I added broken mast stumps to all of them, and used some of the extra bits from the big ship to add a bit of detail to the decks of the smaller ones.  I also made a couple crates to put in the ice around the smaller ships.
I decided, since the base of the large ship would be snow, to paint the base white separately, and then spray the ship.  I'm not sure if I'm going to go with black or a dark brown.  Likewise, I'm not sure how the foam the pirate ships are made of will react to spray paint, so I think I will give them a coat of paint by hand, and then spray over that. 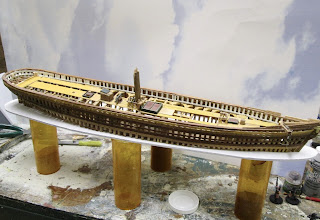 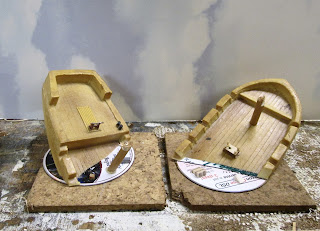 Hopefully, I will get a chance to do some spraying later today.