Frostgrave Campaign '17 Prologue: The Tale of the Wizard Quailelyn

As readers of this blog will know, we recently finished up an 11-month Frostgrave Campaign that we began earlier this year.  We will be starting a new campaign in January, and  I have decided to run a Sigilist warband this time.  I thought I would write a short tale to introduce my new wizard and her Apprentice.

The main library of the Percensua University of Wizardly Studies, located in the capitol of Valindhoa, was an old and cavernous stone building near the center of the ancient school's campus.  One of the first built on the land donated by the king some 800 years ago, it had developed it's share of drafts, groaning hinges, and uneven floors. The young students hated the place, calling it "The Tomb" for it's dark, damp and ancient nature.  To Maga Librarian Quailelyn, it was home. 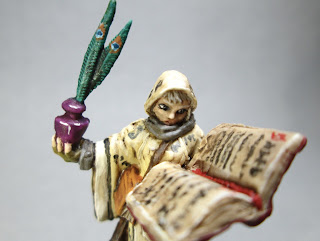 Short, with greying pale brown hair and sea green eyes, Quailelyn had come to the campus as a young student some 30 years ago.  Unlike her classmates though, she had fallen in love with "The Tomb"; its shelf upon shelf of endless books, manuscripts and scrolls...the smell of the parchment and lamp oil...and its' many little nooks and hidden spots.   For Quail loved all things written.  Words to her, no matter printed or scribed by hand, ancient rune or modern text, they held everything she could want or hope for.  The keys to distant lands, the sparks of new ideas, adventure, and knowledge.  But she had also found they contained power.  The use of words, both written and spoken, to produce magical spells, had become her forte and her passion. She excelled in her Sigilisim classes, and her professors saw her for the shining star she was. A shy girl by nature, she threw herself at her studies, and secluded herself into the Tomb.

The years passed; she graduated with honors, and before she had the opportunity to step out into the world,  Quail was hired by the librarians who had become both her only friends, and her surrogate family. As a Junior Librarian she got to stay at the university to work and live amongst the books she loved.
Now, 30 years since she fist set foot on the campus, Quailelyn, Maga Librarian, sat at her large cluttered desk, and stared out the grungy window to her left.  It was snowing outside. Winter had come  early to Valindhoa that year and the Tomb was cold throughout, despite the magical fires torches, and lamps that burned here and there throughout the cavernous building.  But Quail had lived there long enough that the cold didn't bother her much. 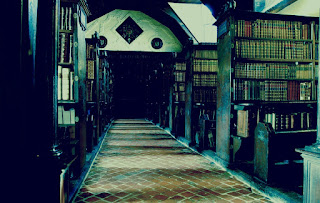 What bothered her at that moment was a sadness and a longing which had become more noticeable in recent weeks.  It now had an intensity that she could no longer dismiss.  She felt a loss, a hole within her, and she wasn't sure why.  More and more she found herself staring out the large windows of the Tomb at the world outside.  Then, as the days passed, she realized she was missing the world; she puzzled at the new longing she felt to walk among trees, and see new sights.  To hear birds sing, and to feel the wind on her face. It was if something was calling her from afar.  Quail stood from her desk suddenly, and, as fast as her dignity would take her,  she made her way towards the large oaken doors of the Tomb.   She leaned into one of them, and pushed. As it was late in the Winter now, an icy blast hit her squarely in the face. Quail smiled at the long-forgotten sensation.  She slowly made her way down the steps, taking it all in and walked into the campus yard.  The Maga Librarian turned her face to the sky and felt the sting of the flakes falling.  She began to turn in place where she stood, taking it all in.  Faster she turned, her senses overloading, until the dizziness over took her an she collapsed into the snow, smiling.  Yes, words held great power, but they escaped her now.  Reality had a magnificent power all its own.
"Um, Ma'am?" a squeaky voice said.
The Maga Librarian, tilted her head down and propped herself up on her elbows to look toward her feet, wet strands of greying hair sticking to her face; and there she saw the young Apprentice Librarian, Bailisette, standing, shivering, a short distance away, arms folded and clutched close to her body looking through her small round glasses at Quail with concern on her face.
"Oh, Bailisette," Quailelyn said as she quickly got up and dusted the snow from her clothes. "I am all right."  Quail laughed to herself thinking about what kind of sight she must be presenting to the young girl, and what Bailisette must think.
"I was just suddenly overcome with the need for some..uh..., fresh air." the Maga Librbarian said haltingly, her cheeks turning a bit red, and not just from the cold.  "Here, let us go back in."
Later that evening as Quail sat working on book invoices, and Bailisette sat across from her transcribing scrolls, the Maga Librarian looked up at the girl and said, "Bailey, do you ever feel alone and isolated working here in the Tomb?  Do you ever long for a life outside these walls?"
Bailisette, looked up a bit confused. "No, Ma'am. I love my job here at the Library. It's like a second home to me." 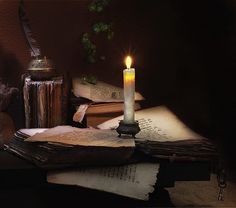 Quailelyn smiled at the girl.  She could see her younger self in the girl's eagerness and devotion to the Library.   Bailey had been an excellent student just like she had, Quail knew.  And she had developed a bit of a rapport with the girl in the year since she had come to work at the Library.  Quailelyn found the girl was easier to talk to than most of the other Apprentice Librarians.  But, she now realized what a solitary trap the Tomb could become for a young life, and wanted to save the girl from it if she could.   "I've been thinking about taking a leave from the Library for a year and doing some traveling." Quailelyn said off handedly with one eye on the girl.
Bailisette looked up shocked. "Ma'am!"
The Maga Librarian continued.  "It would do me good to get out and see a bit of the world and the people in it. But..." She now looked squarely at the young Apprentice, "I could use an assistant and traveling companion to help me on my trip. " She paused.  "Would you be interested?"
The young Apprentice's jaw opened reflexively and hung there.  She was momentarily speechless; capable only of taking the index finger of her left hand and pushing her glasses more snugly up her nose.
Bailey closed her mouth and thought for a moment.  "I...I would be honored, Ma'am?" she said, more as question than a statement of fact.

Quailelyn came back with a large ancient map, and Bailey carefully pushed aside the work they had been doing, as the Maga Librarian spread the map across the desk's surface.
"Now, where should we go?" Quail said, a bit giddy already at the prospect of her journey.
The two women studied the map.
The Maga Librarian slid her finger across the old parchment as the Apprentice stared wide-eyed.  She was still a bit confused and bewildered at the events that had happened all so suddenly; finding herself in a blink of the eye to be the invited traveling companion of the Maga Librarian.
"Insurikar?" Quailelyn mused to her self. "No, too hot and dusty, " she said in answer to her own question.
Her finger continued to trace lines across the old map. "Lornne? Perhaps too far. Krakeden?  Too barbaric.  Felstad..." Her finger paused.  A little quiver went up her finger, her hand, her arm.
Were the stories true, she wondered to herself.  The legends?  The once great magical capital of the world?  Think of the lost libraries that might be there...
Quail looked up at the young Apprentice, "Have you heard the stories of Felstad?"
"Why, yes, Ma'am. In our history studies. Those who have travelled there in recent years have come to call it 'Frostgrave' I believe."
Quailelyn's figure tapped on the map over the large black dot with the carefully scribed, FELSTAD, next to it.  At some point in later years, a long forgotten hand had attempted to update the map, after Felstad had been lost in an icy cataclysm, by crossing out the city's name with a thick  black line   Quail's mind began to calculate, tabulate. A trip to the frozen city of legend could not be undertaken on a whim.  They would need to plan.

A month later, in a wagon loaded with supplies and equipment, the two women passed through the gate of the university. It was a warm Spring day, and Quail's heart pounded with the thrill to be finally off on their journey.  Bailey sat next to her, quiet, in a confused state of panic and excitement. Alongside the wagon rode a new addition to their party: Sir Cardidil, a knight in the service of the university's guard, who had agreed to go along with the pair and act as an escort on the long trip. There were many miles before them, but they all looked forward to the adventure and opportunities that awaited at their destination.


Game 1 of this campaign can now be found here: The Eclipse
Posted by Chris Palmer at 9:43 AM