After making a bunch of bookshelves for our upcoming Frostgrave Library scenario game, I thought I'd also try my hand at a scroll rack.
I used a style similar to the bookshelves I've been making; but instead of using two large flat pieces glued to each side of a foursome of wood cubes, I used just one central large flat piece, and glued the siding around the edges of it.  I then glued all the crosshatched slanted pieces on to each side. 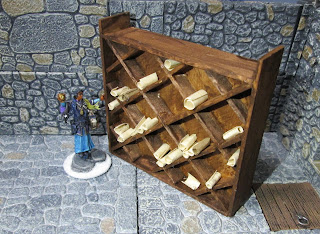 The scrolls were made from some off-white paper I had, cut into short 2 inch by .75 inch sections and rolled around a toothpick and glued along the loose edge.  I then cut them into little scroll sized segments and glued them into place.
Posted by Chris Palmer at 4:30 PM