The Vashta Nerada of Frostgrave

As many of my readers will know, I have been busy these past few weeks building bookcases for our upcoming Frostgrave Campaign game where we will be playing the Library scenario from the core rulebook.  With discussion of what we wanted to do for our game, the conversation naturally turned to two other famous libraries in geek fandom: the spirit infested library from Ghostbusters, and the Vashta Nerada infested one from the Dr Who double episodes, "Silence in the Library" and "Forest of the Dead".
So after talking about someone making a pile of symmetrically stacked books, and having an angry wraith librarian going around telling the combatants, "Shhh!", the idea was put forth to include the famous "piranhas of the air": the Vashta Nerada.
These microscopic organisms, in high concentrations, appear as shadows; and use this appearance as a way to hide and sneak up on their prey.   So I pondered how to make "shadows" as a game figure, and I hit upon the idea of lightly spraying thin plastic cut from a blister pack with black spray paint. 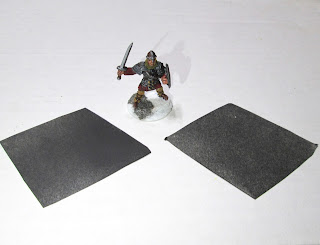 So I cut out a couple of rough rhombus shapes to look something like the shadow cast by a bookshelf.  I then sprayed one side lightly with flat black spray paint just enough so that you could still see through them.
The plan is to use them as some of the randomly appearing beasts in the game; and  in talking about it, we may use the Wraith stats from the rulebook for their move and combat abilities.

Email ThisBlogThis!Share to TwitterShare to FacebookShare to Pinterest
Labels: Dr Who, Frostgrave